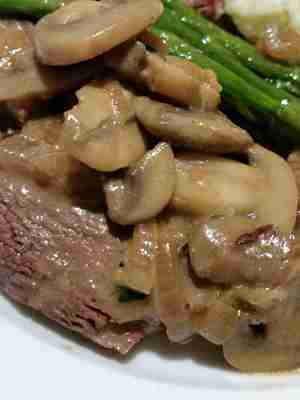 Directions:
• Heat a cast-iron skillet over medium-high until very hot.
• Add 1 TB spoon oil, swirl to coat.
• Sear steaks 6-7 minutes per side for medium-rare; transfer to a plate and tent with foil.
• Add remaining 1 TB spoon oil, mushrooms, and shallots to skillet.
• Season with salt and cook until mushrooms begin to brown, 3-5 minutes.
• Deglaze skillet with sherry, scraping up any brown bits; cook until nearly evaporated.
• Stir in stock, rosemary, and residual steal juices; simmer until reduced to 1/2 cup.
• Whisk together sour cream and cornstarch.
• Whisk into sauce and reduce heat to low.
• Simmer sauce until thickened; season with salt and pepper.
• Serve steaks with sauce.

Original Uzbek recipe I grew up with. Delicious, rich, and unique flavors of the Central Asia.

Brown meatballs in a pan and then slow cook them in your favorite Marinara sauce.Low and slow is usually the best.